From the Supply Chain Act towards an international Level Playing Field 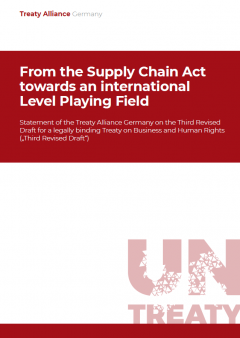 In 2014, the Human Rights Council of the United Nations (UN) mandated an intergovernmental working group to draft an international treaty for the protection of human rights in the global economy. Since then, the intergovernmental working group, which consists of governments, representatives of civil societies and business, has been meeting annually to negotiate the current status of the draft. The third revised draft constitutes the basis for negotiations during the seventh meeting of the working group from October 25 to 29, 2021, in Geneva.