The "Surge" of Iraqi Prisoners 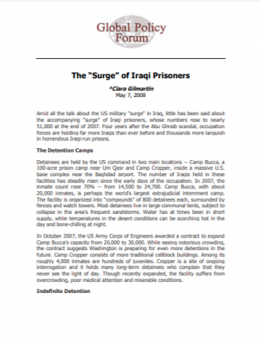 Amid all the talk about the US military "surge" in Iraq, little has been said about the accompanying "surge" of Iraqi prisoners, whose numbers rose to nearly 51,000 at the end of 2007. Global Policy Forum's Ciara Gilmartin states that "US forces hold nearly all detainees indefinitely without charge, an arrest warrant or the opportunity to defend themselves." Human rights monitors, including the United Nations Assistance Mission in Iraq (UNAMI), are denied access to detention centers in Iraq by US officials. This lack of oversight not only increases the likelihood of detainee abuse, but also violates international human rights law. (Foreign Policy in Focus)