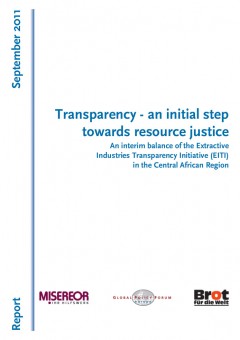 In numerous countries, the exploitation of mineral and fossil natural resources is resulting in violations of human rights, rising poverty and violence. Many partner organisations of “Brot für die Welt” and MISEREOR are campaigning for the people affected. They are urging that those concerned actually benefit from the exploitation of natural resources in their countries, that they can realise their human rights, that the environment is not destroyed, and, above all, that they are comprehensively informed about plans, projects and contracts in connection with the exploration, exploitation and rehabilitation of mining and oil production areas at an early stage and are involved in decision-making. One precondition for a country’s natural resources benefiting the people is transparency. This also includes the disclosure of financial flows between extractive industry companies and governments. This report forms an element of the common efforts by “Brot für die Welt”, MISEREOR and Global Policy Forum to improve transparency in the extractive industries.

In 2002, the Extractive Industries Transparency Initiative (EITI) was launched. Its aim is to raise the transparency of payment flows in the oil, gas and mining sector. After nearly ten years, in the course of which more than 30 states have joined the initiative, enough experience is available for an interim balance. Has EITI met its own goals and really contributed to raising the transparency of payment flows between corporations and governments in the resource-exporting countries, reducing corruption, widening the scope for civil society to take action, strengthening natural resource governance and, ultimately, reducing poverty?

Our report looks at these issues referring to experience in the countries of the Central African region.