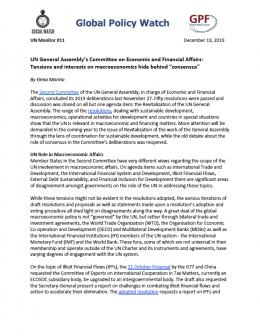 The Second Committee of the UN General Assembly, in charge of Economic and Financial Affairs, concluded its 2019 deliberations last November 27. Fifty resolutions were passed and discussion was closed on all but one agenda item: the Revitalization of the UN General Assembly. The range of the resolutions, dealing with sustainable development, macroeconomics, operational activities for development and countries in special situations show that the UN is relevant in macroeconomic and financing matters. More attention will be demanded in the coming year to the issue of Revitalization of the work of the General Assembly through the lens of coordination for sustainable development, while the old debate about the role of consensus in the Committee’s deliberations was reopened.