UNGA Revitalization and selecting the next Secretary-General 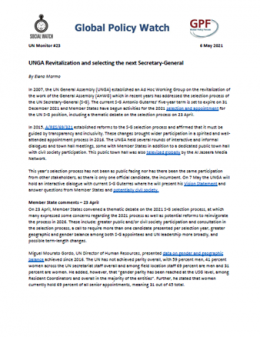 In 2007, the UN General Assembly (UNGA) established an Ad Hoc Working Group on the revitalization of the work of the General Assembly (AHWG) which in recent years has addressed the selection process of the UN Secretary-General (S-G). The current S-G Antonio Guterres’ five-year term is set to expire on 31 December 2021 and Member States have begun activities for the 2021 selection and appointment for the UN S-G position, including a thematic debate on the selection process on 23 April.
In 2015, A/RES/69/321 established reforms to the S-G selection process and affirmed that it must be guided by transparency and inclusivity. These changes brought wider participation in a spirited and well-attended appointment process in 2016. The UNGA held several rounds of interactive and informal dialogues and town hall meetings, some with Member States in addition to a dedicated public town hall with civil society participation. This public town hall was also televized globally by the Al Jazeera Media Network.
This year’s selection process has not been as public facing nor has there been the same participation from other stakeholders, as there is only one official candidate, the incumbent. On 7 May the UNGA will hold an interactive dialogue with current S-G Guterres where he will present his Vision Statement and answer questions from Member States and potentially civil society.