VNRs and Progress Measurement Beyond the HLPF 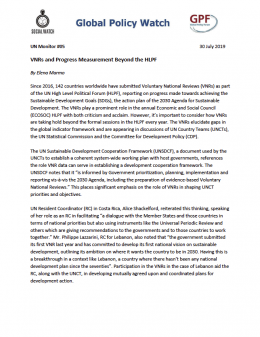 Since 2016, 142 countries worldwide have submitted Voluntary National Reviews (VNRs) as part of the UN High Level Political Forum (HLPF), reporting on progress made towards achieving the Sustainable Development Goals (SDGs), the action plan of the 2030 Agenda for Sustainable Development. The VNRs play a prominent role in the annual Economic and Social Council (ECOSOC) HLPF with both criticism and acclaim. However, it’s important to consider how VNRs are taking hold beyond the formal sessions in the HLPF every year. The VNRs elucidate gaps in the global indicator framework and are appearing in discussions of UN Country Teams (UNCTs), the UN Statistical Commission and the Committee for Development Policy (CDP).

The UN Sustainable Development Cooperation Framework (UNSDCF), a document used by the UNCTs to establish a coherent system-wide working plan with host governments, references the role VNR data can serve in establishing a development cooperation framework. The UNSDCF notes that it “is informed by Government prioritization, planning, implementation and reporting vis-à-vis the 2030 Agenda, including the preparation of evidence-based Voluntary National Reviews.” This places significant emphasis on the role of VNRs in shaping UNCT priorities and objectives.