We talk about petrol 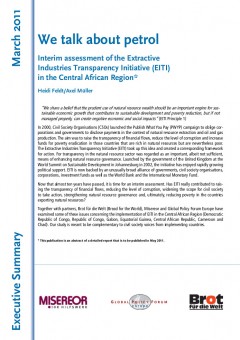 “We share a belief that the prudent use of natural resource wealth should be an important engine for sustainable economic growth that contributes to sustainable development and poverty reduction, but if not nmanaged properly, can create negative economic and social impacts”(EITI Principle 1)

In 2000, Civil Society Organisations (CSOs) launched the Publish What You Pay (PWYP) campaign to oblige corporations and governments to disclose payments in the context of natural resource extraction and oil and gas production. The aim was to raise the transparency of financial flows, reduce the level of corruption and increase funds for poverty eradication in those countries that are rich in natural resources but are nevertheless poor.

The Extractive Industries Transparency Initiative (EITI) took up this idea and created a corresponding framework for action. For transparency in the natural resource sector was regarded as an important, albeit not sufficient, means of enhancing natural resource governance. Launched by the government of the United Kingdom at the World Summit on Sustainable Development in Johannesburg in 2002, the initiative has enjoyed rapidly growing political support. EITI is now backed by an unusually broad alliance of governments, civil society organisations, corporations, investment funds as well as the World Bank and the International Monetary Fund. Now that almost ten years have passed, it is time for an interim assessment. Has EITI really contributed to raising the transparency of financial flows, reducing the level of corruption, widening the scope for civil society to take action, strengthening natural resource governance and, ultimately, reducing poverty in the countries exporting natural resources?

Together with partners, Brot für die Welt (Bread for the World), Misereor and Global Policy Forum Europe have examined some of these issues concerning the implementation of EITI in the Central African Region (Democratic Republic of Congo, Republic of Congo, Gabon, Equatorial Guinea, Central African Republic, Cameroon and Chad). Our study is meant to be complementary to civil society voices from implementing countries.

By Heidi Feldt and Axel Müller