Where the rubber meets the road - CSO perspectives on UNDS reform 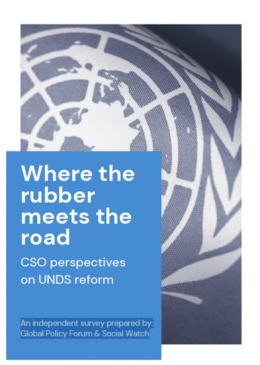 How inclusive is UNDS reform?

On 31 May 2018 the UN Member States adopted a resolution (A/RES/72/279) to reposition the UN development system (UNDS) and the UN Secretary-General spelled out its significance:

The resolution you adopt today ushers in the most ambitious and comprehensive transformation of the UN development system in decades. It sets the foundations to reposition sustainable development at the heart of the United Nations. And it gives practical meaning to our collective promise to advance the Sustainable Development Goals for everyone, everywhere -- with poverty eradication as its first goal, leaving – as we always say - no one behind…In the end, reform is about putting in place the mechanisms to make a real difference in the lives of people.

This consensus decision was the result of five years of expert group meetings, many reports, and multiple informal and formal sessions. It also came two- and one-half years after the adoption at the highest political level of the 2030 Agenda for Sustainable Development. Unlike previous reform efforts that were limited to administrative and “internal” UNDS functioning, the Member State directive was unequivocal in calling for the repositioning of the UNDS in the direction of sustainable development objectives and it put in place major UNDS restructuring for system-wide, value-added UN operations, especially at the country level. While civil society organizations (CSOs) are repeatedly recognized as key players in advocating for and achieving UN goals, they are rarely consulted and engaged in UN reform efforts. Global Policy Watch has conducted an independent survey of CSOs with commitment and experience of working primarily in programme countries on their knowledge and understanding of the reform results.