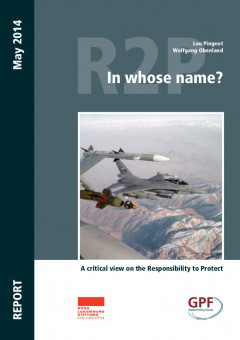 Cover
A critical view on the Responsibility to Protect

Global Policy Forum and Rosa Luxemburg Stiftung—New York Office publish a joint report on the concept of a Responsibility to Protect (R2P).

"In whose name? A critical view on the Responsibility to Protect” by Lou Pingeot and Wolfgang Obenland provides an overview of the history and content of R2P, its positive contributions and its flaws. It concludes that R2P does not give a satisfying answer to the key question it is supposed to address: how best to prevent and, if prevention fails, respond to large-scale human rights violations and killings? The concept is particularly dangerous as it amalgamates arguments and proposals, mixing uncontroversial and widely accepted notions (that states have a responsibility towards their citizens) with more dubious claims (that military intervention is an appropriate tool to protect civilians).

Rather than building a last resort option – military intervention – for when all else fails, there is a dire need to devote attention and energy to prevention and to ensuring that the international system does not fail to begin with. Existing legal instruments and institutions for crisis prevention and management fulfill many of the functions of R2P without undermining the principles of peaceful dispute settlement or the equal sovereignty of states. The report ends with an overview of alternatives that deserve more reflection and action.

By Lou Pingeot and Wolfgang Obenland