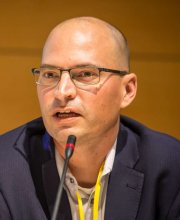 Bodo Ellmers is the Director of Global Policy Forum’s Financing for Sustainable Development Program. This involves management, research, policy development and advocacy on the United Nations and other multilateral institutions.

Before joining GPF, he has worked for the European Network on Debt and Development (Eurodad) in Brussels for 11 years, in his most recent position as Head of Policy. During his times at Eurodad, he has served on UNCTAD Expert Groups, represented CSO stakeholders at the OECD Working Party on Aid Effectiveness, coordinated European CSOs advocacy on the International Monetary Fund, and consulted the UN General Assembly on debt and development finance topics.

In earlier positions, he was the Policy Officer for the German branch of the Global Call to Action against Poverty, during the influential campaign on the German G8 Summit in Heiligendamm, and the Second UN Conference on Financing for Development in Doha. He has also worked as a consultant for the UN Millennium Campaign, VENRO, CONCORD and WEED.

Bodo has drafted numerous influential research reports, blogs and articles on development finance, focusing in particular on debt crisis resolution and on aid effectiveness. He is or has been a steering group member of international CSO networks such as BetterAid, the Reality of Aid Network, and the CSOs Group for Financing for Development.

Bodo is a founding member of Global Policy Forum Europe and has served on the board for several years. He holds a degree in political science and has studied economics at Freie Universität Berlin. He speaks English, German, and some Spanish and French.