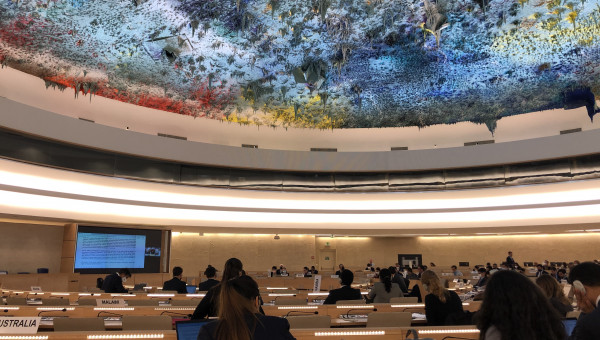 Since 2014, an intergovernmental working group at the United Nations (UN) Human Rights Council in Geneva has been negotiating an international binding instrument to regulate, in international human rights law, the activities of transnational corporations and other business enterprises - also known as the UN Treaty. The eighth of the responsible intergovernmental working group took place from October 24 to 28, 2022. From the countries of the global South to the major industrialized nations, all states were present.

The global trend towards stronger human rights regulation of economic activities and the relevance of the UN treaty process for the development of common global standards in this area is now obvious to all states. Thus, during the eighth session, all the "big players" were in the negotiating room - starting with the U.S., Australia, Great Britain and Japan to India, China, Brazil and Russia. The process continues to be mainly carried by countries of the global South, above all Ecuador and South Africa, Mexico, Namibia, Kenya and Uruguay. The accusation made in some voices that the process lacks critical mass, i.e. that it would not have enough traction because the important industrialized nations would not be involved, has thus been dropped.

Although the U.S. rejected the current draft at the beginning of the negotiating round as being too prescriptive and in some provisions too far-reaching, it introduced concrete proposals for changes to the text during the session.

The EU is also about to enter the negotiations. It is no longer a question of 'if', but of 'when'. Already in this year’s round of negotiations, the EU delegation has been more active than before. With a view to selected articles of the draft treaty, the delegate has outlined the provisions of the forthcoming EU directive on sustainable corporate due diligence. However, the EU Commission first wants to wait until a common position on the EU directive has been found and then initiate a negotiating mandate for the UN process. This should be done as soon as possible so that the EU can actively participate in the upcoming intersessional informal consultations and in the ninth round of negotiations in fall 2023. More than half of the EU member states as well as the German Federal Minister for Labor and Social Affairs, Hubertus Heil, are already supportive of such an EU negotiating mandate.

The UN Treaty would be complementary to the EU directive and the two regulations would strengthen each other. This was presented by the four researchers Nadia Bernaz, Markus Krajewski, Kinda Mohamadieh and Virginie Rouas in a recently published study. For example, the current draft treaty includes several provisions that would improve access to justice for those affected by corporate human rights abuses and environmental damage. Private international law issues are addressed, including jurisdiction and applicable law in transnational cases. Areas that are hardly covered by the upcoming EU directive.

On the first day of negotiations, the German delegate contributed proposals on the content and structure of the future treaty as well as proposals on further negotiation modalities. Binding human rights due diligence standards for companies, as provided for in the German Supply Chain Act and the forthcoming EU directive, combined with rules on access to justice for people affected could be components of the international legally binding instrument.

Alongside with many other civil society organizations from all around the world, several member organizations of the Treaty Alliance Germany were present at the negotiations in Geneva and participated with oral statements and side events.

The new proposals for selected articles, published only few weeks before the eighth round of negotiations by the Ecuadorian chairman of the intergovernmental working group, caused initial confusion during the negotiation week. Neither had the Ecuadorian chair been commissioned by the negotiating states to prepare his own new proposals, nor was the proposal based on the discussions and comments made by the states in previous years. While the Chair's proposals appear better structured, a number of key aspects that are essential for effective human rights and environmental protection in the globalized economy were dropped. Finally, the states present agreed that negotiations should be conducted only on the basis of the Third Revised Draft of the international legally binding instrument. The Third Revised Draft, published in August 2021, was based on the previous rounds of negotiations and had also been commented on by countries during the seventh session of the intergovernmental working group in 2021.

With regard to the content of the future treaty, no progress was made during the eighth round of negotiations. Most states reiterated their positions from the seventh session. They asked for a few new amendments to some articles.

Azerbaijan, Cameroon, France, Indonesia, Portugal, and Uruguay, now forming the Friends of the Chair group will continue to work with the Ecuadorian chair on compromise proposals and hold consultations with the various actors until the next round of negotiations in fall 2023. The Ecuadorian chair will then update and publish the draft treaty to include comments from states made during the 8th session and the results of the negotiations by the Friends of the Chair group by the end of July 2023.