A Compendium of Inequality 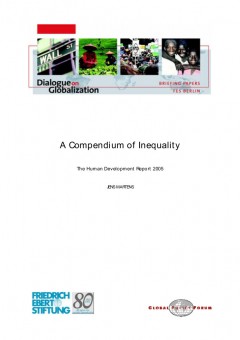 On September the 7th 2005, the United Nations Development Programme (UNDP) published its annual Human Development Report (HDR), entitled “International cooperation at a crossroads: Aid, trade and security in an unequal world”. The UNDP deliberately presented the report a week before the United Nations Millennium+5 Summit. The report was intended to bring global social problems to the attention of heads of State and Government just before the summit in order to challenge them to make rapid and radical changes to world-wide development, trade and security policies. The report substantiate its demands with concrete case studies and up-to-date facts and figures, which show that in many countries, the fight against poverty and the realisation of the Millennium Development Goals have made only limited progress. Fifty countries have actually lost ground as regards at least one goal. This relates especially to countries in southern Africa, where the HIV/AIDS pandemic has had dire economic and social consequences. However, the authors of the report also emphasise problems of growing inequality within and between countries. They suggest that sustainable progress in human development can only be made once the inequality of access to resources and of the distribution of power within and between countries can be corrected. Up to this point, the report indicates, questions of distribution have proved a ‘blind spot’ for the MDGs.