UN Reform and the Millennium Goals 2005 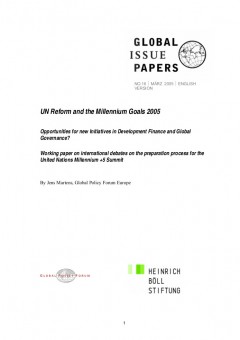 Cover
Opportunities for new Initiatives in Development Finance and Global Governance? Working paper on international debates on the preparation process for the United Nations Millennium +5 Summit

The year 2005, it is to be hoped, will be a decisive year for thorough reform of the United Nations. The High-Level (heads of state and government) Plenary Meeting of the 60th Session of the UN General Assembly (Millennium +5 Summit) is due to meet in the middle of September 2005 to discuss the future institutional and sectoral development of the UN. On the agenda are the new challenges of global security, poverty eradication, the implementation of human rights, gender equality and the long-awaited institutional reform of the UN.

The Heinrich Böll Foundation is accompanying this process by taking part in German and international discussions on these central issues and providing comprehensive background information. The Foundation has commissioned Jens Martens of the Global Policy Forum to sketch out the key issues and most important debates on the UN reform process. This Policy Paper summarizes and evaluates the thousands of pages of detailed reports commissioned by UN Secretary-General Kofi Annan in preparation for the Summit.

This study focuses on the UN Millennium Project Report “Investing in Development”, written under the direction of US Economist Jeffrey Sachs (also known as the Sachs Report). It introduces numerous initiatives of various governments, particularly those focussing on the implementation and financing of the Millennium Goals, including that of poverty eradication, and identifies the lines of conflict and contradictions. As many non-governmental organisations are using the September Summit and the debates on the Millennium Goals as the focal point of mobilising campaigns, their demands are also presented here.