War and Occupation in Iraq 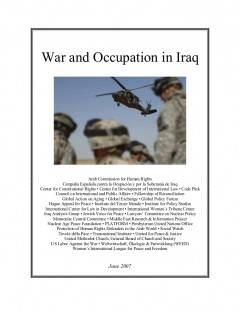 On March 20, 2003, the United States, the United Kingdom and a Coalition of allies invaded Iraq and overthrew the government of Saddam Hussein. They claimed to bring peace, prosperity and democracy. But ever since, violence, civil strife and economic hardship have wracked the land. Though US President George W. Bush delivered his “mission accomplished” speech on May 2, 2003, the conflict has continued for more than four years. Thousands of innocent people are now dead and wounded, millions are displaced, several of Iraq’s cities lie in ruins, and enormous resources have been squandered.

This report considers many aspects of the conflict, with special emphasis on the US Coalition’s responsibilities under international law. It also considers political
and economic issues in Iraq and argues for urgent change, including a speedy withdrawal of Coalition forces. The report does not examine in detail the insurgency, or the criminal gangs and militias which are so often in the news. These forces, which have diverse motivations, often engage in violent tactics and some are responsible for large numbers of deaths and injuries among innocent Iraqi civilians. The increasing bloodshed and sectarian division among Iraqis is abhorrent. But whatever responsibility Iraqis themselves bear for the present impasse within the country, the primary responsibility lies with the United States and its Coalition, whose military occupation gave rise to these groups and whose policies have failed to protect the Iraqi people or to bring peace, prosperity and democracy, as earlier claimed.

By James Paul and Céline Nahory