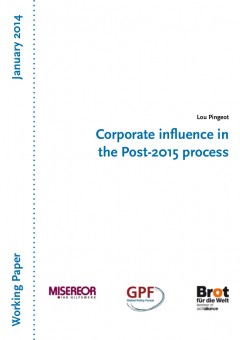 As the 2015 deadline for the MDGs fast approaches, UN member states have started negotiations to define a new global development framework for the time after. This process is expected to culminate in 2015 with the definition of a Post-2015 Sustainable Development Agenda. Corporate interest groups and large transnational corporations such as Unilever, Vale, AngloGold and many others have been actively involved in this process, including the Secretary General’s High-Level Panel and the Sustainable Development Solutions Network. In addition, the Global Compact has provided a privileged channel for corporate influence in the post-2015 agenda.

This working paper by Brot für die Welt, Global Policy Forum and Misereor provides an overview of the main corporate actors in the post-2015 process and how they shape the discourse on development.

The private sector certainly has a role to play in the future of sustainable development. But the messages and visions of transnational corporations and business associations are worrying. Rather than binding multilateral agreements, they advocate for public-private partnerships and voluntary initiatives that largely leave both governments and private actors off the hook. They focus on growth, free markets and and new technologies (to be provided by the private sector) as a silver bullet solution to eradicate poverty, decrease inequality and preserve the environment, without reflecting on how the current growth paradigm has led us to the situation we face today.

This paper advocates for more transparency around the participation of corporations in UN processes, including their financial support to UN initiatives, and for more reflection on the risks of a corporate, private interests-driven development agenda.