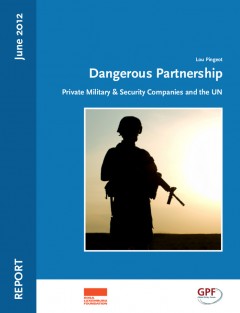 Cover
Private Military and Security Companies and the UN

The United Nations is increasingly hiring Private Military and Security Companies (PMSCs) for a wide array of security services. The UN’s leadership says these services are needed to protect the organization’s staff and worldwide operations from growing threats and unprecedented dangers. UN security officials argue that the private military and security industry provides cost-effective and readily available services to answer these needs.

But many observers have raised serious questions about these companies and their work. Reports from governments, NGOs and the media – detailed in this paper – have shown that PMSCs have committed serious human rights abuses, killed or injured innocent civilians, engaged in financial malfeasance and committed many other breaches of the law. In spite of such well-known concerns, the UN has hired – sometimes repeatedly – some of the major offenders. Given this negative track-record, serious questions arise as to whether PMSCs are appropriate UN partners for the complex task of creating a secure, just and lawful world.

This report aims to clarify the issue and reflect on its implications for the future of the UN. The research, conducted through a review of UN documents and secondary literature and interviews of UN staff and partners, provides new information on UN contracting and the companies used by the organization. The report will consider the problems as well as possible solutions – not just through regulatory reform but also through re-thinking the UN’s approach to peace and security frameworks more generally. It is our hope to stimulate debate and discussion, so as to break through the silence and to re-think the role of a more democratic and effective UN in the years ahead