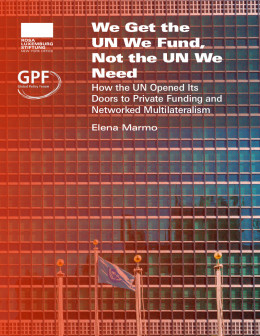 On 11 March 2022 at United Nations (UN) Headquarters in New York City, Secretary-General António Guterres addressed an audience of Member States, UN staff and other stakeholders at the final consultation meeting on his proposed Our Common Agenda. He urged Member States: “The process surrounding Our Common Agenda is an opportunity to recommit to our fundamental enduring principles while overhauling the practices of multilateralism for a new age.” The report details this new multilateralism to be “an inclusive, networked and effective multilateralism.”

This concept of a networked multilateralism, evidenced by a series of multistakeholder consultations throughout February and March 2022, presents yet another new term to describe the rising UN engagement with members of the private sector. Thus far, multistakeholderism has been used to refer to broadening intergovernmental processes so that a diverse set of stakeholders are included: business associations, private philanthropic foundations, civil society and academia to name a few. It represents a trend that risks shifting the UN’s policies and approaches toward the private sector’s interests, namely profit-driven motives and market-based solutions, and away from what people and the planet really need.

This briefing will outline trends in UN System funding that have contributed to the rise in Public-Private Partnerships (PPPs) and highlights the latest manifestation of this: networked multilateralism at the UN. In this context, it is important to consider the potential risks and dangers of a multilateral system constrained by restricted, or earmarked, funding and an overreliance on corporate partners that remain largely unaccountable to human rights and other sources of international law.